What to do if you want to earn more money than shares or bonds in less time……..? Derivatives does something similar.

In this article, we will understand in simple and easy Hindi what is derivative and how it works, so read the article till the end.

Note – If you want to understand the basics of share market from zero level then you should start with Part 1.

Derivatives are one of the fastest ways to make money in the capital market. With this method, profit can be made in the least amount of money. But the point is that if the profit is high then the risk is also very high. Some people come to this market only for the purpose of earning a lot of money, while some people come to reduce their risk. How all this happens, we are all going to understand further.

Securities can be broadly divided into three parts –

You can see this in the chart below. 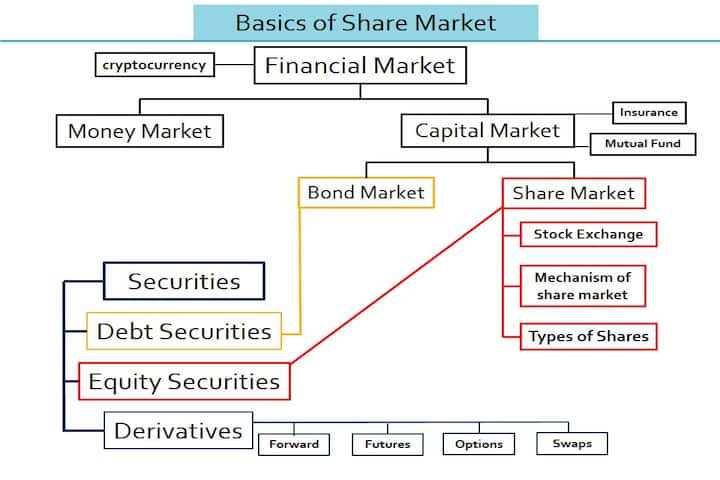 In other words, any instrument that has no value of its own, but its value depends on something else. The thing on which its value depends is called the underlying asset. What does all this mean, let us understand it with an example.

what is derivative; understand by example

Suppose you have been circling a government office for several days and your work is not being done. But one day you talk to a big officer and he writes something on a paper and gives it to you by signing it and says that you take it and show it to that particular staff, your work will be done.

You take that paper and you’re done. So you think to yourself whether that paper had any value. Not at all, the paper itself had no value. Its value is due to the sign that that competent authority has put on it. That is, that paper is getting its value from somewhere else. That’s what derivatives are.

From where it is getting its value i.e. that sign, it is the underlying asset of that paper. Because if it was not signed, the paper would have no value. You can take many such examples from around you.

For example, take a bank note, it is just a piece of paper. But it has a value of its own as RBI approves it. That is, the value of a bank note is being received from RBI, hence RBI became the Underlying Asset of that note.

Financial Derivatives – Similarly, if the Underlying Asset of a derivative is an instrument such as a stock, index, etc., then we call it financial derivatives.

The fact is that the stock is best suited for long term investment. But if you want to print a lot of money in a short span of time, then derivatives are best suited for this. More and more money can be earned from this in a very short time. How all this happens, everyone is going to understand further. Let us first talk about the types of derivatives.