Like stocks, bonds are also a way of raising capital. Its buying and selling market is called bond market.

In this article, we will discuss about the bond market in a simple and easy way and understand its various important aspects.

Securities can be divided into three parts – (1) Equity securities, (2) Debt securities and (2) Derivatives securities. You can see this in the chart below; 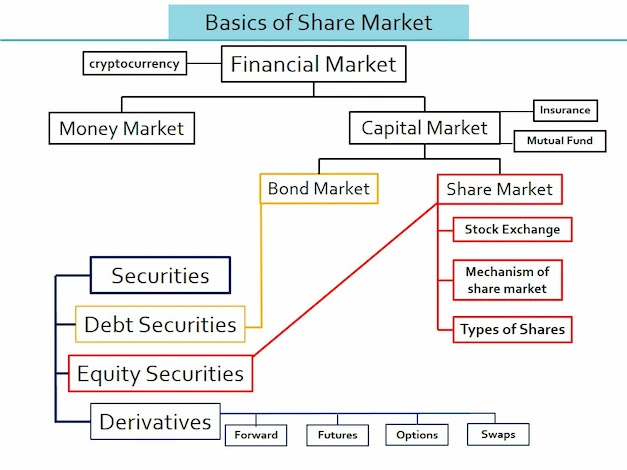 There are separate articles on Equity security and Derivatives securities. In this article, we will discuss about one of the debt securities, a bond and a small number of debentures.

Through this chart, we can understand that a bond is a debt security, that is, it is related to loans or borrowings etc. This loan is traded in the bond market. Just like shares are traded in the stock market.

There are mainly two ways for any company or institution to raise money from the market. One can settle the money as per the need by issuing shares or bonds and otherwise by taking a loan from the bank.

Here, let’s know a little about bank loans – the interest rate of the bank is often very high and all the rules and regulations related to it are decided by the bank itself. EMI starts as soon as the loan is taken and the biggest thing is that it cannot be traded like shares are traded. Said so because this is all the reason that makes Bond relevant. That’s not all the hassle in bonds.

Let us now understand Bond in a little detail in the context of India. Although the basic concept of bonds is the same for the whole world, only policy or institutional changes may take place in it.

Like bank loan, bond is also a type of loan, but here this loan is given to the public by not giving it to the bank, hence this market is also called loan market or credit market.

In another way, a bond is a financial instrument that is issued by a company or government to collect money from the market. Just as a company issues shares, in the same way bonds can also be issued, it is also related to a stock exchange in the same way as shares.

What are the characteristics of a bond?


The value of a bond also fluctuates in the same way as that of a stock. Because ultimately it also depends on the performance of companies or governments and demand and supply. Just one main difference between the two is that when you buy shares of a company, you buy a stake in that company, whereas if you buy a bond, you do not get a stake in that company. Then the question comes, what do you get?

Suppose you have bought a bond of Rs 10,000 from a company or government for a period of 5 years and the company has promised you 10 percent interest on it, then at the end of every month you will get Rs 1000 (because of 10000 10 percent is 1000) This is called a coupon. 10,000 rupees will be returned to you when your period of 5 years is completed. This is how the bond market works.

If the price of the bond increases in the market, then you can also sell it. Just like a share.

But remember one thing here that if you have taken a bond of Rs 10,000 and after some time the price of that bond becomes Rs 20,000 and if you do not sell it then do not think that you will now get 10 percent of Rs 20000 ie that 2000 rupees will be available every month.


No matter how much the market rate of the bond increases, you will get 1000 rupees only because it is already fixed and this is one of its specialty that people invest money in it. Because suppose if the market rate of that Rs 10,000 bond falls to Rs 5000, you will still get Rs 1000 as before. That’s why bonds are considered a safe investment because if the stock were in its place and its market value fell, then no one would be able to save you from the loss.

What is Capital market ?

What are the types of bonds?

Bonds are generally divided into two types, a government bond and a corporate bond.

The are bonds that are issued by some form of government. As if –

State Government Bonds – It is usually issued by the state government to balance the fiscal deficit. All these bonds are listed on the stock exchange.

Municipal and Local authority bonds – It is issued by the municipality or similar local government. It is usually issued to meet certain targets like roads, water supply etc.

Public Sector Bonds – This is also a type of government bond as it is issued by government companies such as NTPC and BHEL etc. The largest shareholder of these companies is usually the government.

Tax free bonds – These are also issued by government undertakings such as National Highways Authority of India (NHAI), Indian Railways Finance Corporation, HUDCO, etc. The only difference in this from other bonds is that the interest earned in it is not taxed.

As the name suggests, it is issued by non-government companies. Like shares, there is no stake in companies in this, but a certain interest is definitely available in it. There are generally two types of corporate bonds.

Regular payouts – You usually get regular interest payments when you invest in debt funds. Many people like it only for the regularity of income.

Low risk – In debt funds, the risk is low, the interest amount is fixed and the principal invested is returned at a fixed time.

Low return – Now if there is less risk then obviously the return will also be less. Overall, these are ideal for those who value safety over high returns.

What is a Securities ?